Most people don't seem to need a lot of instruction on how to solve paint-by-number puzzles (or nonograms, griddlers, hanjie, picross, or whatever else you like to call them). The basic solving technique is easily demonstrated in a simple example, such as the one on the front page of this site. I expect most reasonably clever people could figure it out even without being shown. And that basic solving technique is really pretty powerful, and can be used to solve most puzzles. However there are some cases where slightly more elaborate logic tricks are required to solve a puzzle.

"Line solving" is when you work with one row or one column at a time. Sometimes this is simple and straight forward, like the case below, where we know the cells marked "A" must be black:

Sometimes it takes a little thinking about different cases, like in the case below where the single "B" cell must be black:

And sometimes there are things that are pretty darned hard to spot, like the fact that cell "C" in the line below needs to be white:

But though line solving isn't always "simple" in the sense of being easy, it at least always involves looking at only one row or column at a time.

By the way, computer programs written to solve paint-by-number puzzles love line solving. It's just the kind of thing a computer loves - looking at one small part of the problem at a time and hoping that an overall solution will come together out of that. Puzzles that are solvable by line solving alone are almost always easily solvable by computers. It's in the cases where you have to look at more of the puzzle to figure things out that humans can really outsolve the computer programs.

Here's a symmetrical puzzle (a warning to compulsive solvers: this doesn't look like anything when solved. It's just an example of symmetry.):
Example 4

Line solving gets you nowhere on this puzzle.

Unfortunately, on this web site at least, you can never be sure that a puzzle really only has one solution, and without knowing that, solving using symmetry is a bit of a cheat. We don't normally consider a puzzle "logically solvable" if it can only be solved by symmetry. The exception is that if the author of the puzzle puts some information in the title of a puzzle like "[has only one solution]" then it is completely legitimate to use symmetry to solve the puzzle because that information was given to use as part of the puzzle. (See, for example, puzzle #65.)

Though solving by symmetry is kind of cheating, it's certainly not a case of looking at just one line at a time. You really have to look at the whole puzzle to detect symmetry.

Here's a much trickier example:

Again, line solving gets us nowhere, and we'll ignore the rotational symmetry of the puzzle (which is tricky to spot and cheaty to use).

A productive line of reasoning, however is to ask which cells in the second row can be red. By looking at the top clues, we can see that the cells marked with "A" cannot be red. They could be either green or white, but not red. But if that's the case, then cell "B" must be red, and can be marked red, because every place the red three could be includes that cell. The same logic can be applied on the other three sides of the puzzle, and once you've done that, the rest of the puzzle is easy to solve with line solving.

The trick with color logic is remembering which colors each cell can be. Some computer programs, like the "checker" used on this site, keep a list of possible colors for each cell. If you do that, then all the above puzzles become easy to solve by plain old line solving (though the line solving algorithm becomes a bit more complex). Possibly you could invent some system of notation that would let you do the same thing on paper, but I doubt it would really be useful. In practice, it's really just a matter of figuring it out in your head. Tricky, but I don't think example 6 is really trickier than, say, example 3.

"Edge logic" (or "boundary logic") is a logic trick frequently useful along the edges of a puzzle. Puzzle #23 on this site was designed as an example of this sort of thing. It looks like this:

It's hard to imagine a puzzle less ameniable to line solving. Experienced solvers will notice one promising feature immediately however: along the bottom edge there is a fairly big number (the "4") with only small numbers (a "2") in the next row up.

The trick in such cases is to consider those two rows together. Since the "4" row is right on the edge of the puzzle, it's easy to see what the consequences are if the "4" is in different locations and to check if those consequences are consistent with the "2" row. So we just mentally try the "4" in different positions. We might start by supposing that cell "A" was black. Obviously that would mean all the cells marked "B" would have to be black too. Looking at the column clues, we see that the two cells marked "C" would have to be black too. While the cells marked "D" would have to be white. But this makes for an impossible pattern of blacks and whites in that row. There can only be a two in that row. So this means "A" cannot be black and must be white.

Once you get the idea of this, it is quite easy to see that most of the places where you could place the four in the bottom row would produce an impossible pattern in the second row from the bottom. In this puzzle there is actually only one place it can be, which is the position shown below. In any other position it would either give three blacks in the second row, or two blacks with a white in between.

Edge logic is useful in a lot of puzzles, but it doesn't usually work quite as well as it did in example 7. Often you'll find that there are several different places where the edge block could be. But that still may be enough to allow you to dot a few cells (especially in the corners) and it may be that all possible positions overlap on a few cells that you can paint black.

Another pattern that one frequently encounters is the "smile". We call it that because the most common form that it appears in is the smile shaped puzzle below:

The solution, shown at right is unique, but none of the techniques we described above let us solve it (well, symmetry does, but we don't want to use symmetry).

The key to it is all the ones in the column clues. We know that there can be only one black in each column, so we know that the horizontal 1 and 2 blocks never can overlap each other. Since the 1's can't be next to each other either (because we need a white space between them) the blocks from the two rows must alternate. They have to go 1,2,1.

The exact same reasoning applies to the puzzle below, with a solution that looks more like a snake than a smile:

Normally puzzles don't start out with so many columns containing just a one. This is more a kind of situation that sometimes develops in a puzzle that is almost complete, where there were a lot of other clue numbers in the columns, but those have already been placed. Smile logic is something usually used late in the solving process, unlike edge logic which can be applied at any point. (But, for an exception to that rule, see puzzle #6542).

Another common variation of smile logic occurs in situations like the puzzle below:

This puzzle has already been partially solved using classic line solving, but line solving doesn't get us any further. But the eight unsolved squares are really in exactly the same situation as the basic smile pattern in example 8. The same reasoning can be applied to solve this.

The example below is similar to ones I sometime use when I'm otherwise stuck. I haven't got a really clever name for it, but for now I'm calling it "two-way logic". It has been solved as far as line solving will take you. What's not so obvious is that all the cells marked "A" must be white.

So the basic idea here is to look for places where you know one of two cells must be black. For each case think just a move or two ahead, to see what other cells you could set in that case. If any cells get set the same way in both cases, then you can mark them.

A slightly different example of the same trick is shown below. Using two-way logic on the two open cells in column seven lets you set exactly one cell, which makes the rest of the puzzle solve:

Again, it happens that this puzzle can also be solved by edge logic. It's hard to contive small puzzles that can only be solved by two-way logic.

Sometimes interesting things can be achieved by adding up how many cells need to be set in a particular region. Here's a puzzle contrived to demonstrate this trick: 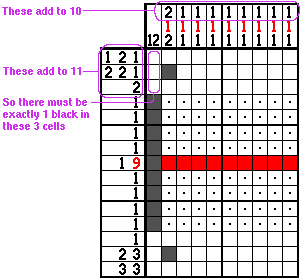 We've used simple line solving to fill in a lot of space, but we've got unsolved regions at the top and the bottom still to figure out. The next thing we'd naturally try to complete this puzzle would be edge logic on the 12 in column one, but that doesn't get us anything.

Now, if we look at the column clues, we can use them to figure out how many cells there are in the top three rows for every column except column one. Column 2 must have 2 cells, and the other eight columns must have one each, for a total of 10.

So, since the row clues tell us there must be 11 cells filled in, in the top, and since we know there are 10 in columns 2 through 10, there must be exactly one black cell in the first three rows of column 1. That tells us exactly where the 12 in column 1 must be, and the rest of the puzzle is trivial to solve.

I've only ever used this trick on a handful of actual puzzles, but it's nifty when it works out.

Obviously this isn't an exhaustive list of every fancy logic trick that is useful in solving paint-by-number puzzles. Sometimes you have to invent a new one from whole cloth to solve a puzzle. But hey, that's fun, isn't it?

Of course, some people prefer to just guess if the going gets tough. If that makes you happy, then it's OK with me, I guess.